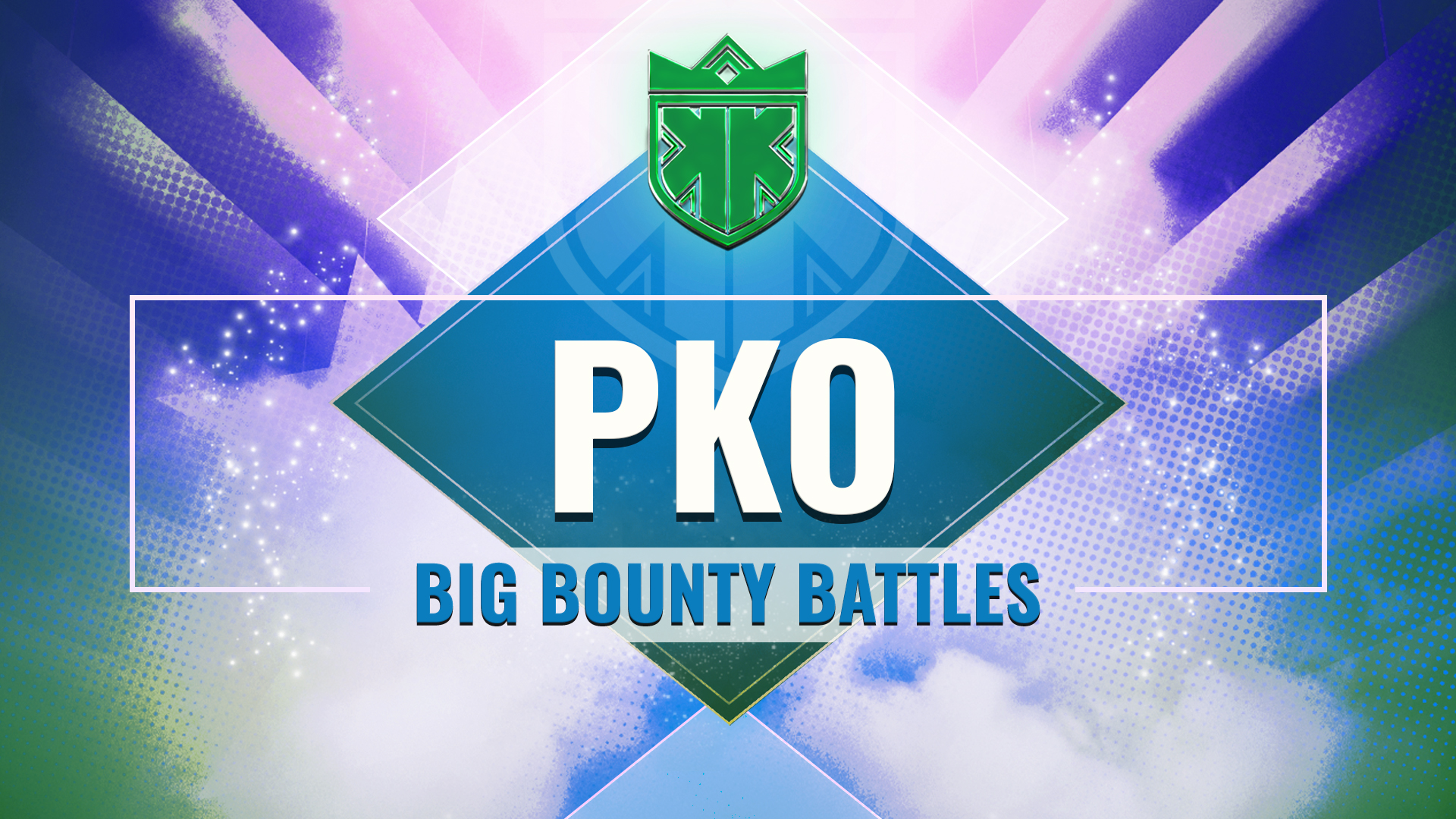 Looking to boost your KKPoker tournament schedule and add even more exciting action?!

Learn all about KKPoker PKO tournaments here with important need-to-know information, PKO strategy tips, and the reasons why PKO tournaments continue to grow in popularity.

PKO (Progressive Knockout) is a popular poker format that continues to gain many fans due to the exciting strategy dynamics and increased opportunities to earn real money cash prizes.

PKO at KKPoker is a bounty-based tournament and can be played in both NLH and PLO formats. In regular KKPoker PKO tournaments, the buy-in amount (minus the standard entry fee) is split into two, with one half going into the main prize pool and the other half assigned as a player bounty.

When you successfully eliminate another player in a KKPoker PKO tournament, their bounty splits in half, with half awarded as a prize and instantly added to your in-app wallet, with the other half added on top of your current bounty value.

Player 1 eliminates Player 2, who has a $9 bounty.

As the PKO tournament progresses, the players’ bounty prize will continue to increase based on the number of opponents they eliminate and creates exciting chances to win big cash prizes even before reaching the traditional prize pool payout places.

PKO tournaments are a fantastic addition to any poker player’s daily schedule, so keep reading to learn more!

WHY SHOULD YOU PLAY PKO MTTs？

Want quicker ways to win cash prizes at KKPoker? PKO tournaments continue to grow in popularity, and one of the main reasons is the ability to earn prizes faster than regular poker tournament formats.

The exciting hand battles in KKPoker PKOs come with the thrill of winning chips and the opportunity to earn rewards before even reaching the prize pool payout positions.

Unlike traditional poker tournaments, which operate with a flat payout structure in line with the number of entries and prize pool generated, PKO players could easily earn back their buy-in in the early levels by eliminating opponents.

Interestingly, in PKO tournaments, players may even collect a bigger prize than an opponent who finishes in a higher position due to the number of bounty prizes each player collected before their elimination.

These differing game dynamics are especially good for players who have less time to commit and want a change from playing the traditional poker tournament format.

PKO tournaments are part of the regular KKPoker MTT offerings with guaranteed prize pools and round-the-clock action for our worldwide player pool.

Take a look at our most popular formats:

Whether you are new to PKO tournaments or an experienced bounty hunter, KKPoker offers exciting and rewarding MTTs for all.

Previous KKPoker WARRIOR MTTs have come with guaranteed prize pools ranging from $10,000 up to $50,000!

Tip: For a chance to qualify for the KKPoker WARRIOR, enter the satellites and earn your ticket for less than the normal WARRIOR buy-in.

Playing PKO tournaments in NLH or PLO format will come with considerable similarities to standard tournament formats. For PKO beginners, the game format will be very recognizable, so concentrate on fully understanding the bounty aspect.

PKO strategy is extremely important to study due to the differing prize pool structure compared to traditional poker tournament formats.

With the PKO tournament prize pool split between the traditional payout method and the inclusion of player bounties, eliminating players during the tournament is much more significant than in traditional poker structures.

How Can You Adapt Strategy?

Having more chips than your opponent and winning the pot when they’re all-in.

These factors mean it is even more important to continually build your chip stack for a chance to win bounty prizes throughout the tournament.

One of the main strategy shifts from traditional MTTs to PKOs is all-in ranges and calling ranges.

Hand ranges are a common strategy to study in poker tournaments and are essential to progression. In PKO tournaments, the bounty prizes available play a crucial role, and the all-in and calling ranges associated with normal MTT poker will need to be adjusted based on the bounty prizes on offer and the unique prize pool distribution.

If a player is all-in and has accumulated a large bounty prize, it is much more likely their opponents will call with a wider hand range in an attempt to win the bounty prize. The potential high-value cash bounty prize means the potential EV (expected value) call with more hands is generally accepted, despite the possibility of losing chips.

In the early stages of a KKPoker PKO tournament, player bounties will remain low, and the play is likely to be very similar to a regular tournament format.

However, it is important always to remember the value of your bounty, as well as your opponents.

For example, you built up a large chip stack after eliminating several opponents and increased your bounty. Although opponents may fear playing against you due to your chip stack size, your bounty is an incentive, and because of this, you may face extra resistance to your bets.

Furthermore, if you were to lose a pot that dramatically reduced your chip stack, you would become an even bigger target.

Keep your eyes peeled for the upcoming exciting WARRIOR PKOs for a chance to win even bigger prizes!